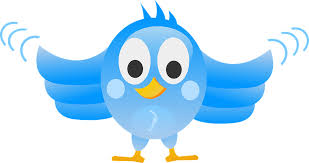 Not only is Dingell’s Twitter account extremely entertaining about all sorts of topics outside of politics (sports, the Kardashians, self-deprecating humor), when he wants to, he can wield Twitter as a most effective political weapon.

If you’re not familiar with John Dingell, he’s the longest serving Congressperson in United States history.  A Democrat from Michigan, he served in the House for nearly 60 years, from the end of 1955 until his retirement in January of 2015.  (His wife, Debbie Dingell, ran for and won the election to fill his newly empty seat.  He usually seeks her approval approval before posting his tweets just to be sure he’s not “making an ass” of himself with anything he’s posting).   Before joining Congress, Dingell – now 90 years old – served in World War 2, was a private practice lawyer, and worked as a forest ranger among other things.

Dingell began tweeting while he was still serving in the House, and in 2014 Buzzfeed called him “probably the best person on Twitter.”  He and his Twitter account have been the subject of several other profiles, such as this one and this one. These articles shared some of Dingell’s greatest Twitter hits:

Retirement allows you plenty of time for important meetings. pic.twitter.com/ZbGpwWoOm9

Feeling old because you remember when Pluto was a planet back when you were younger?

I was born before they even discovered the darn thing.

So it's a tornado full of sharks? That's what the entire film is about?

But a very recent profile is my favorite.   Jason Sattler (better known as @LOLGOP on Twitter) wrote an article last month, “Trump meets match in ‘tweet king’ Dingell,” about how John Dingell is the perfect Twitter foil for Trump:

The best way to stop an unstable 70-year-old with an itchy Twitter finger is the world’s greatest 90-year-old Twitter user — @JohnDingell . . .

You could argue that the left would be better served if its official digital response came from a somewhat younger voice from one of the communities most likely to bear the brunt of Trump’s attacks on reproductive health care, immigrants and voting rights. But institutions are all that Americans can rely on now to protect us from Trump’s sleep-starved, anti-democratic impulses.

And John Dingell is an institution.

Here are just a couple of Dingell’s tweets aimed at the Trump administration:

Forget the basket. The truly deplorable ones end up in the cabinet. 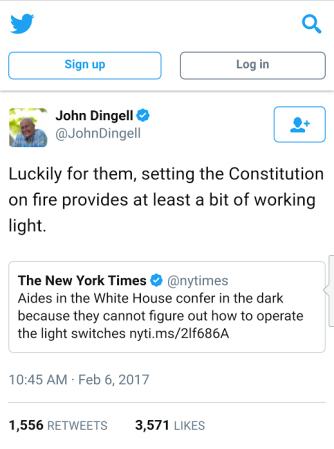 More recently, Dingell has turned his attention toward the GOP’s Obamacare replacement bill. As with his other political tweets, his comments can be quite biting, but he almost always laces them with humor.  Last week the CBO dealt the GOP health care bill a bad blow with its report on the devastating consequences the bill would have. But MSNBC’s Rachel Maddow unintentionally provided the bill a momentary reprieve when she announced that she’d obtained Trump’s tax returns.  The “bombshell” turned out to be a letdown when she had only the 2-page 1040 from returns that were more than a decade old.  But this was how John Dingell responded:

Oh no wait that's just how many Americans will lose health care under his terrible plan.

But this week, with the full House vote on the bill set for Thursday, and with Trump and GOP leaders putting on the full court press to get the hold-outs to become “yes” votes, Dingell’s health care tweets turned serious.  He sent out a long “thread” (a series of related tweets, for those unfamiliar with Twitter) looking back at his many years in Congress – and his father’s years there before him – and the very long struggle to reform health care and make insurance available to every American.

He begins the thread with a little dig at Trump, tweeting, “Who knew health care could be so complicated?”  I won’t recap the entire thread here because it’s fairly long (close to 30 tweets), but I’ll give you a sampling.  It’s worth a couple minutes of your time to go to this link, where the entire thread is collected in nice, readable form.

Dingell’s thread helps put the current battle in context. It’s pretty profound the think that politicians in this country have been fighting for decades upon decades to expand access to health care, and it took until 2010 to really achieve the first significant step in that direction. And now, the country is led by another set of politicians whose greatest dream is to take that insurance away.  Thursday could be the first step toward their accomplishing that dream.

In 1943, my father was one of the first people to introduce comprehensive health care reform in Congress, a single-payer system for all.

In 1957–and every Congress thereafter–I'd reintroduce my father's bill & work to create a national program to take care of those in need.

We took another shot in the 90s but again came up short. You know who knew damn well how complicated health care could be?@HillaryClinton.

Hearing after hearing, amendment after amendment. We took the time to hear concerns from all.

Republicans were invited, too. They declined.

Before this, many had to decide between bankruptcy or death. Children hit lifetime caps. Cancer & being a woman were preexisting conditions.

They haven't thought about the 24 million estimated to lose their coverage, or the millions more who have benefited from Medicaid expansion.

They spent nearly a decade doing everything they could to undermine the ACA, and now throw their hands up in the air and declare it broken.

One thought on “No ReTweet, No Surrender”