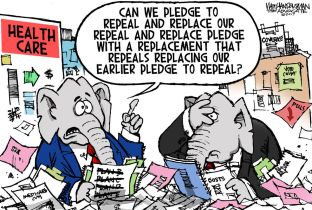 of the Senate GOP health care bill Monday night, President Donald Trump’s immediate response was to take full responsibility and pledge to do better for the American people.  Just kidding, of course he blamed the whole thing on Democrats and plotted to unleash suffering upon millions of innocent American citizens.

Asked about the bill’s failure on Tuesday, Trump told reporters his next plan was to:

And while it’s incredibly disturbing to think that our President would allow millions of people to lose insurance and suffer the resulting health crises just so that he can score a political win, it’s not all that surprising. Because, as you’ll see below, he’s already been taking steps to make it happen.

Plus, not only has he offered up this gem of a plan to reporters several times before, but plenty of other Republicans have been selling the line that Obamacare is imploding or collapsing (or dying – choose your favorite), and maybe the best idea is to just let that happen and then force Democrats to join in on a new plan (as if they’ve actually been open to Democrats participating at any point during this process).

“We’ll just let Obamacare fail. We’re not going to own it.”

-President Trump, describing his plans for 17 percent of the US economy.

But here’s the truth: Obamacare is not in a death spiral.  If Obamacare does end up dying, it will not be a death by natural causes.  It will be because Republicans strangled the life out of it.

I’ve been writing here for months now about the various ways in which Trump and the GOP have been sabotaging Obamacare (some of it – by congressional Republicans – preceded Trump’s presidency).  To be fair, Obamacare definitely had some inherent weaknesses, fixes were needed to bring down costs.  I touch on that in the note at the end of this post: Obamacare Wars – Part 1.  But overall, Obamacare when implemented as intended runs pretty well, and in fact, it was beginning to really stabilize in 2016 and early 2017.  But that might be in jeopardy for 2018, thanks to efforts by Trump and his GOP accomplices.

So now, in light of Trump’s claim on Tuesday that he plans to “let” Obamacare fail, I’m going to repost a prior entry on how he and the GOP are actually making Obamacare fail (or, at least, giving it their best effort). I’m choosing this entry for a repost out of the many I did on the topic of GOP sabotage, because here you get to hear it from the people who know best: insurance company insiders & executives finally got so frustrated and concerned about the situation, and having such difficulty trying to figure out how to plan for 2018 that they spoke out about what Trump & the GOP were doing.

ACA was on pace for record sign ups on Inauguration Day. Trump then ordered his agencies to kill it. If it dies, he is the sole executioner. https://t.co/HaPFOaPa6b

If you’re interested in this topic, I hope you’ll also read:

No Sleep Till . . . which is another post with comments from insurance industry insiders. It comes one month after the one posted below – the issues mentioned below had still not been resolved. (And in case you’re wondering, no, they still haven’t been even now.  Trump continues to make threats and dodge commitments, weakening the markets for next year).

I Know You Planned It

Trump & the GOP are Sabotaging Obamacare

I wrote about the two most prominent examples of this sabotage in another recent post, Obamacare Wars – Part 3.*  It’s helpful to read that post to get a full understanding of what the issues are and how the GOP is handling them.  But in short, Trump and the GOP have 2 crucial decisions they are in the midst of making that will determine the fate of the Obamacare markets. The choices they make on these key issues could either stabilize the markets or help destroy them.

These two key issues are:

(1) whether they will reimburse insurance companies for cost-sharing reductions (CSRs) for low income customers.  The CSRs significantly reduce out-of-pocket costs for millions of Americans.  Insurance companies take the hit on the front end by charging eligible customers less for things like deductibles & co-pays, and then they’re supposed to be reimbursed by the federal government for those costs; and (2) whether they will meaningfully enforce the individual mandate.

Trump/the GOP have given no final answers on either of these questions yet. But so far, all indications are that they’re taking a route that will do significant – perhaps fatal – damage to Obamacare: (1) refusing to make any commitment on the CSRs & even threatening not to fund them, and (2) appearing to soften enforcement of the mandate through the IRS.

And as I explained in the original post, simply by delaying these decisions, Trump & the GOP are already doing enormous harm to the viability of the markets.

Insurance companies are making their decisions right now about whether to stay in the markets next year, so by failing to give these companies the assurances they need about whether the federal government will meet its commitments in 2018, Trump/the GOP are leaving many companies with no choice but to pull out of the markets or drastically increase premiums.
And even now, weeks since that post was written, Trump/the GOP still have not given the insurance companies or the public any reassurances that these issues will be resolved.  In fact, in an interview just last week with The Economist, Trump once again threatened to cut off the cost-sharing payments, saying:

“[T]here is no Obamacare, it’s dead. Plus we’re subsidizing it and we don’t have to subsidize it. You know if I ever stop wanting to pay the subsidies, which I will. Anytime I want.”

So that has to be causing a whole new wave of apprehension for the executives at any insurance companies that are – for the moment, at least – still planning to continue selling in the individual market next year.

Don’t Take It From Me, Here’s What the Insurance Execs Say

I’m rehashing all of this now because Sarah Kliff of Vox, who has consistently done great work covering the health care beat, had an article out last week that vividly illustrates what I’ve outlined above.  Kliff ‘s article, The Trump administration is making Obamacare more expensive, is basically a rundown of quotes from various insurance industry executives explaining how the uncertainty caused by the Trump administration is causing them to either (1) significantly raise premiums for 2018 or (2) pull of the market entirely for next year. Please go read Kliff’s whole article for the full effect, but I’ll give you some choice excerpts:

Some health insurance plans selling on the Obamacare marketplaces are planning steep 2018 rate increases, in part to account for the uncertainty over how the Trump administration will administer the law.

The administration has been aggressively ambiguous about key policy issues, like whether it will enforce the health care law’s individual mandate or pay out insurance subsidies aimed at the lowest-income Obamacare enrollees.

In response, insurance executives tell Vox they will charge steeper rates in 2018 in order to avoid losing money. Others are quitting the marketplace altogether, saying the future just looks to uncertain to take a gamble . . .

“The health plans I work with want to stay in, but the Trump administration is not making that easy,” says insurance industry consultant Robert Laszewski.

First, come the health care execs explaining that they will have to raise their premiums. A lot:

Burrell says that his plans would have had hikes this year anyway, because it has lost money during its three years on the Obamacare marketplaces. But it tacked an extra 15 percent onto its premiums because it does not expect the Trump administration to enforce the individual mandate.

“The current approach at the federal level has been to say they’re not going to enforce it,” he says. “We think the effect of that is to encourage healthy people not to enroll.”

Evergreen Health, a small insurance plan in Maryland, wrote in government rate filings that uncertainty around the individual mandate and other policy issues was the “primary driver” of its requested 27 percent premium increase.

The biggest uncertainty, however, insurers see on the horizon is whether the Trump administration will pay cost sharing reduction subsidies. This is an $8 billion pool of funding to reduce co-pays and deductibles for low-income Obamacare enrollees.

Then there are the execs explaining that the uncertainty makes the markets too risky, so they’ve decided to pull out entirely instead:

“Without swift action by the state or Congress to provide stability to Iowa’s individual insurance market, Medica will not be able to serve the citizens of Iowa in the manner and breadth that we do today,” the plan said in a statement to the Des Moines Register.

“While there are many potential solutions, the timing and relative impact of those solutions is currently unclear,” Wellmark chief executive John Forsyth said in a statement when they quit the Iowa marketplace. “This makes it difficult to establish plans for 2018.”

Aetna said it was quitting “a result of financial risk and an uncertain outlook for the marketplace.”

And Kliff makes the key point: while there were some struggles under the Obama administration with insurers wanting to leave the market, Obama saw that as a problem, i.e. something that he wanted to fix, and he did whatever he could to encourage insurance companies to stay. As a result, under the Obama administration, there was never a single county that went without an insurer.

Health insurers tell @sarahkliff that they are raising premiums *because of* the Trump administration’s actions:https://t.co/UQiPf84VNL

Republicans, on the other hand, see this situation as an opportunity to be capitalized on.  They’re using these exits – exits that they’re helping to cause – as an occasion to help sell their version of health care reform, by saying essentially: who cares what’s in our bill, anything’s better than the failing Obamacare.  They are gleefully touting false claims of an Obamcare “death spiral” to try to convince constituents to support their extraordinarily rushed effort to push through an extremely unpopular bill to replace it.  But of course they neglect to mention that they are a large part of the reason Obamacare may end up failing.**

And now numerous counties around the country are likely to have no insurer for 2018.  Republicans are gambling that constituents who suffer as a result will keep blaming Democrats, even though Democrats no longer control any levers of power in government.  As polarized as the country is today, that might be a winning gamble, at least in the parts of the country that matter to them for getting re-elected.  And in the end that’s what this is really all about, isn’t it??

*Trump and/or the GOP have also used other tactics to sabotage Obamacare in the past.  I wrote about those tactics in Obamacare Wars – Part 2, for anyone interested in getting a fuller picture of the ways in which the GOP has managed to stunt the success of Obamacare without even having to repeal it.

**Even with the struggles outlined in this post, Obamacare is still doing well in many parts of the country.  At this point, Obamacare is not considered to be in a death spiral.  But whether it can survive much longer with these efforts by Trump & the GOP to weaken it, only time will tell.