Are you forgetful?? In today’s world of very fast paced, over-filled lives, that seems to be a common complaint from friends & acquaintances: 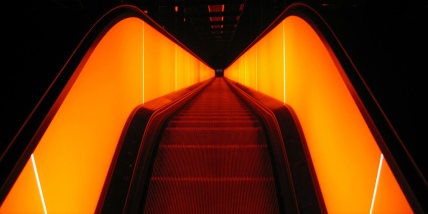 they just have a hard time remembering things. But I like to think of myself as having a pretty good memory.  Thankfully, I have Facebook to keep me humble in that department.

You know how every few days Facebook gives you those “Memories” that pop up on your wall – a post you made one or two (or even five or seven) years ago that Facebook resurfaces to give you a look back?  I’m shocked at how often I’ll have no recollection whatsoever of the post that Facebook decides to show me.  It makes me realize that maybe my memory isn’t as great as I think it is.  But this weekend Facebook showed me a “Memory” that I actually vividly recall: 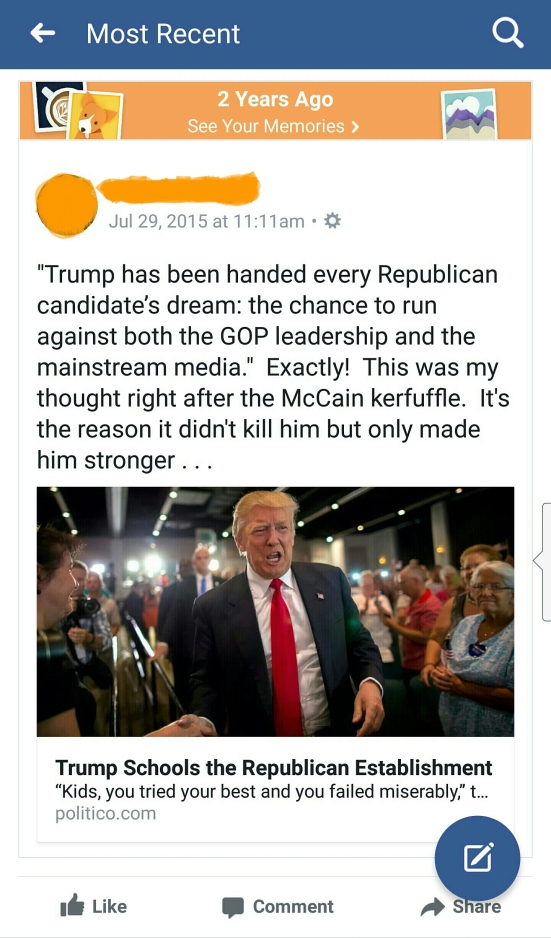 That post, as you can see, was from July 29, 2015 – a little more than a week after Trump had made his now infamous comment that Senator John McCain is not a war hero because, “I like people who weren’t captured.”  I remember that period of time so distinctly, because the feeling of panic I had in the aftermath of that comment is seared into my brain.  I was panicked – and surprised – at the way the incident was being covered in the press, because of how badly both the media & the GOP were misunderstanding Trump’s appeal to the GOP base.

I could not understand how after 8 years of watching the Republican base react to Obama with such hatred, after years of watching the Tea Party develop & metastasize into a roiling ball of fury, it wasn’t obvious to everyone that Trump was channeling that hatred & anger better than anyone – and that the base loved him for it, like deep down in the bones “finally someone understands me” kind of love.  I couldn’t comprehend how they didn’t see that the people who loved Trump hated them – “them” being the media along with the GOP establishment (which meant both GOP leadership and party stalwarts like John McCain, who the base thought didn’t do enough to stop Obama) – and that the more they chastised Trump over his comments, the deeper the base’s love for Trump grew. *

.@SenJohnMcCain should be defeated in the primaries. Graduated last in his class at Annapolis–dummy!

This phenomenon seemed so clear, yet the pundits and the political analysts and GOP leaders just kept chastening Trump and waiting for the inevitable plunge in his poll numbers to arrive . . . which of course it never did.  And that same pattern repeated over & over again with every new Trump outrage.  Yet it took until Trump had the nomination nearly wrapped up for the media and the GOP to finally catch on to what was happening.

In addition to doing a lousy job in taking care of our Vets, John McCain let us down by losing to Barack Obama in his run for President!

Now that we’ve all watched Trump operate for two plus years, I think most have come around to these observations – in fact, they seem obvious at this point.  But at the time, two years ago, when Trump made those comments about McCain, most observers were still viewing the race through the same old paradigm.  They said, “oh my god, Trump’s done.  He’s going to have to drop out.”  Or “oh my god, he’s done. The voters will throw him out.”

That was the overwhelming consensus.  And that’s exactly why it was wrong.  Not only was the GOP base furious, full of years of pent up anger, they were contrary – they were tired of being told what to do by an “elite” establishment that had spent years accomplishing nothing other than selling them a pile of broken promises.  If that establishment disliked Trump, then Trump was the guy the base was going with.

The Veterans Administration is in shambles and our veterans are suffering greatly. John McCain has done nothing to help them but talk.

There’s a misconception I sometimes hear now which says that the GOP never stood up to Trump during his presidential run.  The idea being that if the Party had just tried, they could have prevented him from even entering the primary.  But that’s not true.  They did stand up to Trump.  The real problem was that they stood up to him at the wrong time.  They bashed him heartily during the primary in ways that only made him stronger, and then they completely caved to him during the general election, when standing up to him (or refusing to support him) could have actually made a difference.

Here’s what one Republican said in response to Trump’s insult of McCain: “Donald Trump owes every American veteran and in particular John McCain an apology.” This Republican went on to say that Trump’s comments made him “unfit to be Commander in Chief.”  Who was that Republican?  Rick Perry, currently serving as Trump’s Secretary of Energy.

Okay, you may say, but Rick Perry was running against Trump at the time – of course he criticized Trump (as did most of the other candidates).

Enough with the slanderous attacks. @SenJohnMcCain and all our veterans – particularly POWs have earned our respect and admiration.

If there was ever any doubt that @realDonaldTrump should not be our commander in chief, this stupid statement should end all doubt.

But what about Republicans as an institution, what did they do?  Well, here was the then-spokesman of the Republican National Committee (RNC):

Sen. John McCain is an American hero because he served his country and sacrificed more than most can imagine. Period.  There is no place in our party or our country for comments that disparage those who have served honorably.

Some of you might remember who that spokesman was: none other than Sean Spicer, who until a week ago was Trump’s White House Press Secretary.

.@SenJohnMcCain is an American hero because he served his country and sacrificed more than most can imagine. Period.

So Republicans did try to stop Trump’s candidacy throughout the primary.  But the GOP was powerless to stop him (again, to be clear, in the primary not the general election), because the tools they tried to use – sending signals through Party “elites” or through the media – were the very tools they’d spent years teaching the base to mistrust.  Any and all efforts to stop him only reinforced & increased his popularity.

However, the fact that Republicans did stand up to him – actually rebuked him very strongly – during the primary just highlights how thoroughly they caved to him in the end.  They saw in him all the ugly qualities the rest of us saw.  They knew he was manifestly unfit for the job.  But once they were unable to stop him from claiming the nomination, they threw their lot in with him anyway, putting their Party ahead of their Country.

And now, two years later, all those qualities are still there in full force, and Trump – as President – is still following the exact same playbook he did during the campaign: “running” against the media and against his own party.** In fact, he’s almost entirely preoccupied with waging these battles, seemingly to the exclusion of many of his standard presidential duties.  What worked so well for him when he was running for election is a disaster for running the country.  And the Republicans who caved to him once he became the nominee – with big dreams of power and legislative success in mind – are now learning the hard way that selling your soul is rarely worth the price.

Republicans in the Senate will NEVER win if they don't go to a 51 vote majority NOW. They look like fools and are just wasting time……

On a separate but related note, in a wonderful bit of timing, that Facebook memory showed up just one day after Senator McCain was the deciding vote on the GOP Obamacare repeal bill, causing it to fail. (Of course Senators Collins and Murkowski deserve as much – if not more – credit for holding the line throughout the entire process, against tons of pressure from colleagues, bullying from Trump and some quite nasty language from a couple male Congressmen).

I have been very tough on Senator McCain on this blog, specifically about him talking big and then not following up with actions to match the big talk.  Those previous posts were mainly about whether he and other GOP Senators were truly willing to provide checks on Trump’s behavior or whether they were just talking a good game.  But I’ve always said that if McCain proves me wrong, I’ll be the first to give credit where it’s due.  So here I am saying it: Senator McCain definitely proved me wrong on this one – he did exactly what he said he would do when he gave that speech on the Senate floor last week.  He followed up with actions to match his soaring words.   And I’m grateful for it.

.@SenJohnMcCain-Thank you for coming to D.C. for such a vital vote. Congrats to all Rep. We can now deliver grt healthcare to all Americans!

*Obviously Matt Latimer, the author of the article linked in my FB post got it – but generally the media, pundits, political analysts and GOP establishment did not seem to.

**Sean Spicer and Reince Preibus, both of whom Trump fired from the administration in the last week or so, had long relationships with the RNC.  Both were seen as the main connections keeping Trump tied to the “establishment” wing of the Republican Party. And now he’s severed those connections.

Trump has also spent the last few weeks humiliating Attorney General Jeff Sessions publicly through Twitter.  Sessions remains very popular with his former colleagues in the Senate, so Trump’s actions here have obviously strained his relations with the GOP Senate.   Trump has also been publicly attacking his own party, including leadership, over their failure so far to pass a health care bill.

***To be clear, all of the above is not meant to imply that everyone who voted for Trump did it out of hatred for Obama, or out of any sort of hatred or anger.  But what I described above applies, generally, to the most energized portion of the GOP base, and it’s the reason that Trump’s selection as the GOP nominee in 2016 was almost inevitable from the start.

One thought on “Souls Sold”