Do you like magic shows?  I think the occasional magic trick can be fun, but I’ve never been especially excited by them. But here’s something I really did enjoy: back in July I read a post by law professor Michael Dorf that used magic as a metaphor for what was happening with the GOP and its attempt to repeal and replace Obamacare. 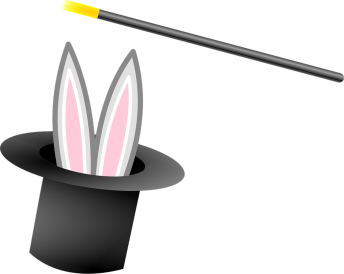 Dorf’s analogy stuck in my mind because I thought it was an elegant – and accurate – way to describe the strange and seemingly inexplicable behavior we were watching.  I’m bringing it up now, several months later, because I think the same metaphor aptly describes what’s happening with the GOP tax bill.

Dorf’s post was written specifically in response to an attempt by the GOP Senate to pass the so-called “skinny repeal” bill.  Just to refresh your memory, GOP leadership  tried to sell this bill as something that would not be the real bill but was simply a vehicle to keep the process moving forward.  They claimed that they just needed to pass something so that they could get to conference with the House (once both chambers pass their own bills, they get together in “conference” to work out a compromise between the two bills).

But in reality, if the Senate passed the skinny repeal bill, the House had the option to just skip the conference and instead vote on the Senate bill as it stood.  Then that would become the final bill.  So some Senators were reluctant to vote for “skinny repeal” (which all of them claimed at the time to hate) out of fear that it would actually become law.

Yet, 49 of the 52 GOP Senators did end up voting for that terrible bill.  Murkowski, Collins and McCain were the only holdouts.* So in his July article, Dorf set out to explain how 49 GOP Senators managed to convince themselves that voting for that bill (not to mention the other awful versions of the bill) was a good idea.  And, in addition to that, how is it that a sizeable minority of the voting population cheered them on as they did it?  Dorf found his answer in an episode of This American Life – an episode focused on magic.

In that episode, the hosts of the show explained that while many magic tricks lose their mystery once you know how they’re done, some tricks become even more impressive once you learn the secret behind them, because even knowing the secret, you still can’t quite figure out how the magician pulls it off.  In relaying how he related this episode on magic to Obamacare repeal, Dorf said two things that especially struck me.  One was about the audience:

Let me say first very clearly that with respect to Obamacare, there are a number of people for whom it has genuinely been a bad deal.  So I am not claiming that everyone who wants Obamacare repealed is being tricked or fooled. It’s understandable why this first group would be happy to see it repealed.  But there are millions of people who have benefited enormously from Obamacare and will be massively screwed by its repeal, yet they were also rejoicing at the thought of its demise.

So how do you explain these people cheering at the idea of losing decent, affordable insurance in exchange for the GOP’s empty promises? [Take a look back at my numerous past posts on the GOP’s health care bills and their Obamacare sabotage if you want more detail on the various ways the GOP has misled about this entire subject]. His is not the entire answer, but Dorf’s post explains one part of it: They’re the willing audience at the GOP magic show.  Their minds want to be fooled because the magic is so enjoyable.  They want to believe the illusion.  And so they do.

Disheartening anecdote. One family thought Obamacare kicked son *off* insurance at 26, instead of keeping him on until then:
cc @sarahkliff pic.twitter.com/ZuOahxX4uu

But what was even more interesting to me is what Dorf said about the magicians themselves:

A truly elegant trick, they say, fools the magician himself as he performs it.

This was the main reason Dorf’s post has stuck with me all these months.  I think this is the crucial insight.  Because it’s the magicians, the ones conjuring these tricks – the GOP electeds themselves – who are being fooled by their own con.  They’ve been telling  certain lies for so long, they’ve been so immersed in the conservative thought bubble, going on Fox News and conservative talk radio, and consulting with conservative think tanks who are paid to tell them what they want to hear, that they’ve become genuinely convinced of things that are entirely contradicted by reams of objective evidence.

And I want to stress – I’m not talking here about simple opposing opinions.  There are plenty of issues on which the parties can have honest differences of opinion. I’m talking about issues where the GOP talking points contradict either the documented historical record or the objective evidence of every expert on the given topic (other than the ones that are paid to back them).

I used to think they were simply lying when they tried to sell certain policies to the American people by touting untruth after untruth.  And often times that is certainly the case.  But when I read Dorf’s post, it dawned on me that in many cases, they’re actually being fooled by a trick they’ve pulled so often that they’ve forgotten it’s not reality.  A perfect case in point, relating again to Obamacare, is the myth Republicans love that Obamacare was “jammed” through Congress in a rushed, secretive process before anyone could read what was in it.  This is the exact opposite of the truth – the Obamacare process was in fact unusually slow and deliberative, as I explained here.

Remember when the GOP complained about the ACA being "rushed through?"

Well, here is what a truly rushed legislative process looks like. pic.twitter.com/T0QoyPro36

But Republicans have told this lie so often and for so many years now, that it’s become an article of faith among both Republican officials and the Republican base.  After telling each other this story so many times for so long, they actually think it’s how things happened.  In fact, if you were on any sort of social media in the last few days after the Senate tax bill passed, you would have seen an endless numbers of conservatives defending that rushed, secretive process simply by saying, “oh yeah, what about Obamacare?”  They’re so convinced it’s true, they even tried using that line on a historian:

And now we’re watching the same cycle take place with the tax bill.  I’m not going to get into a detailed discussion about all the false claims the GOP is making about the tax bills.  Thankfully there has been loads of good coverage of both the House and Senate bill in the media (print media mostly), so it’s all been exhaustively covered.  If you’ve been following the coverage at all, then you know that just about everything the GOP has been claiming the bill will do for the economy, for middle class families, for jobs & wages, etc is false, according to nearly every objective analysis.  And in the meantime, the bill would do a whole lot of destructive things that Republicans are papering over.  But something happened recently that made me realize that maybe it wasn’t so simple as them lying to us about it.

A fun part (no…really) of being a historian of tax politics/policy is that I’ve done tons of research — looking at distro, loopholes, etc. — on just about every major tax bill in 20th/21st centuries. And I can honestly say this GOP bill is *THE WORST* since at least the ‘20s.

Instead, it seems they’ve become so invested in these lies – whether over the last few months of selling the bill, or over the last few decades of Republican tax cut theology – that they truly believe them.  So last week, when the Senate’s non-partisan numbers cruncher, the Joint Committee on Taxation (JCT), came out with its report on how the bill would affect the deficit, Republicans appeared to be truly shocked by it.  The JCT said that the Senate tax bill would add $1 trillion to the deficit over the next decade (and this was using a method that’s particularly favorable to Republicans, called “dynamic scoring”).  The result was completely in line with what all of the outside groups had said when they analyzed the bill.  But Republicans seemed to be genuinely taken aback by that analysis.

Of the 10 analyses were aware of of the final House and near-Final Senate bills, none say it will cost less than $1 trillion after growth, let alone zero – https://t.co/ZuTxJU2FtE

They of course handled it by dismissing the prediction and coming up with excuses why it couldn’t be true.  But reporters were able to see in the initial responses that Republicans were surprised.  This made me realize that when Republicans kept insisting over the last few weeks that their tax cuts would “pay for themselves,” they actually believed it.  I had viewed this as something that was so obviously disproven  – again, every outside analysis indicated that the tax cuts would blow up the deficit** – that they couldn’t possibly believe it.  But it turns out they actually did. I had clearly been underestimating the ability of a well practiced magician to trick even himself into believing.

*This is sadly ironic because all 3 of these Senators just voted in favor of the Senate tax bill, which contains a repeal of Obamacare’s individual mandate.  This will have essentially the same damaging effects as voting for the skinny repeal bill would have. So they stood up to their party, presumably in order to defend certain principles or priorities, and endured significant backlash for doing so, only to now completely undo whatever it was they were standing for with this vote in favor of the tax bill.

**Not to mention that history has shown us over and over again that tax cuts don’t pay for themselves.

This is deeply troubling, after every bit of evidence from the Bush tax cuts and the Kansas disaster, shows that the tax cuts do not have any major impact on adding revenue or boosting growth. That even reasonable Republicans have drunk this KoolAid is insane https://t.co/MfkkCzRuWv