One of the best parts about this time of year is that we get all of the year-end lists and superlatives, e.g. “The 100 best books of the year” or “Word of the Year” or for political junkies “Politifact’s Lie of the Year.” And earlier this month, Time magazine named its 2017 Person of the Year.  This year, Time chose to bestow that designation on “The Silence Breakers.” 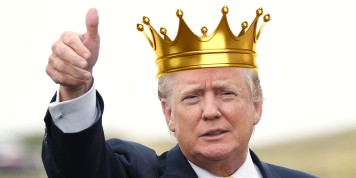 But Time gave second place to none other than President Donald Trump.  Trump, likely foreseeing that he wouldn’t be chosen for the top spot, sent a tweet a couple weeks in advance of Time’s announcement to let us all know that he never wanted that dumb title in the first place. In other words, he pulled the old “you can’t fire me, I quit.”

Time Magazine called to say that I was PROBABLY going to be named “Man (Person) of the Year,” like last year, but I would have to agree to an interview and a major photo shoot. I said probably is no good and took a pass. Thanks anyway!

The silliness had me thinking back to last year, when Time did choose Trump as its person of the year.  Shortly after Time announced that choice I read a really interesting in depth analysis of Trump’s Person of the Year cover image.  Since Trump seems so disappointed to miss out on winning the title again this year, I thought we’d let him relive some of last year’s glory by going back and taking a look at that cover and that analysis again right now.

Here’s the analysis by culture writer Jake Romm at The Forward.  I hope you’ll click over to read the whole thing, because this is one where the beauty is in all of the specific details – a few short excerpts won’t do it justice.  But I will give you a few excerpts now for just a taste . . .

Romm begins by pointing out that many people mistake Time’s Man of the Year selection as an honor, when in fact it’s not necessarily a positive distinction. I would add that based on his behavior, Trump seems to share this misunderstanding with the masses:

Time Magazine’s annual “Person of the Year” announcement is, year after year, grossly misunderstood. Time Magazine is clear on its sole criterion – “the person who had the greatest influence, for better or worse, on the events of the year” – yet, do a simple search on Twitter and you will find countless people who seem to think that the “Person of the Year” selection is tantamount to an endorsement. Previous winners have included Joseph Stalin (1939, 1942), Ayatollah Khomeini (1979), Adolf Hitler (1938), and other figures who I think it is safe to assume the Time staff does not endorse.

Romm then goes on to say that Time’s choice of cover image for Trump gives us some clues as to whether Time views Trump “for better or for worse.”  Romm focuses on three elements of the photograph:  the colors, the pose, and the props (i.e. the chair in which Trump is seated for the photo).

Notice how the colors appear slightly washed out, slightly muted, soft. The palette creates what we might call a vintage effect . . . [T]he color suggests an older type of film, namely, Kodachrome. By reproducing a Kodachrome color palette, the Time cover makes us reimagine the cover as if it were an image from the era of Kodachrome’s mass popularity [between the late 1930’s and 70s]. . .This visual-temporal shift in a sense mirrors a lot of the drives that fueled Trump’s rise . . . This election was not just about regressive policy choices, but also about traditional values . . .

In our post-monarchic time, the power of the throne is largely gone, but the power of a seated figure remains. The chair itself is unimportant, it is the act of sitting that matters. By placing a portrait in this tradition, the chair assumes the role of the throne, and the sitter the role of king (or queen) — the visual effect is the same . . .

The brilliance of the chair however, is visual rather than historical. It’s a gaudy symbol of wealth and status, but if you look at the top right corner, you can see a rip in the upholstery, signifying Trump’s own cracked image. Behind the bluster, behind the glowing displays of wealth, behind the glittering promises, we have the debt, the tastelessness, the demagoguery, the racism, the lack of government experience or knowledge (all of which we unfortunately know too well already). Once we notice the rip, the splotches on the wood come into focus, the cracks in Trump’s makeup, the thinness of his hair, the stain on the bottom left corner of the seat — the entire illusion of grandeur begins to collapse. The cover is less an image of a man in power than the freeze frame of a leader, and his country, in a state of decay. The ghostly shadow works overtime here — suggesting a splendor that has already passed, if it ever existed at all.

All of this is, of course, just one writer’s analysis of Trump’s Time magazine cover.  It’s possible Romm saw things in it that Time magazine and/or the photographer never intended.  But whatever Time intended, everything Romm wrote in this piece about Trump’s history, his character, his campaign, the sense of foreboding his impending presidency had cast over the nation and what all of that that might portend for the upcoming years, has so far proven itself to be correct, at this point nearly one year into Trump’s presidency.

One thought on “King of Flop”