Russian murders, Russian testimony, Russian spies, but no Russian dressing. That pretty much sums up the week.

What else happened this week that you didn’t hear about?

That’s coming up, but I have to start today with a story you almost certainly did hear about, because it’s just too surreal not to comment on.

1. The New York Times reported Thursday that two White House officials were the sources for the intelligence material that Devin Nunes revealed at his impromptu press conference last week, wherein he seemed to be trying to give credence to Trump’s wire tapping tweet.

One source is “the senior director for intelligence at the National Security Council”, and the other is “a lawyer who works on national security issues at the White House Counsel’s Office and was previously counsel to Mr. Nunes’s committee.”

Though neither has been accused of breaking any laws, they do appear to have sought to use intelligence to advance the political goals of the Trump administration.

On Thursday evening, the Washington Post added that there was a third White House official involved.

I think it’s important context for this current story to bear in mind this Washington Post  report about Devon Nunes from last month.  In February, the Post reported that the Trump administration asked Nunes (and Senator Richard Burr, Chair of the Senate Intelligence Committee) to call reporters to help tamp down the reports about connections between Trump associates and Russia.  Nunes (and Burr) obliged.

A spokesman for Nunes said that he had already begun speaking to reporters to challenge the story and that, “at the request of a White House communications aide, Chairman Nunes then spoke to an additional reporter and delivered the same message.”

It’s patently clear that Nunes can’t run a clean investigation into anything related to Trump, as he’s proven over and over that his top priority is clearing Trump’s name, no matter what the charge.  The White House/Trump is obviously enlisting him, along with White House staff, in obfuscation efforts, and Nunes is playing right along.  But no one on the GOP side seems interested in doing anything about it.

2. An interesting side note to the Trump wire tapping circus, a new CBS poll shows that 74% of Republicans believe it’s very or somewhat likely that Trump’s phones were wire tapped during the campaign.  And the public overall is pretty evenly split, with 47% believing, and 50% saying no.

And some Trump’s supporters don’t give a darn whether Trump’s claim is true or not, they just love hearing him say it:

3. Congressman Ted Yoho of Florida might have given the most revealing interview of all when he was asked Thursday morning (before the sources were revealed) if he was concerned that Nunes ran to Trump with the leaked intelligence information. Yoho  responded:

But it’s been evident from day one that the GOP  was not going to provide any checks on Trump’s behavior.  Yoho’s interview response is a classic example of what they call a Kinsley gaffe.  That’s when a politician inadvertently reveals the truth –  a truth they didn’t intend to admit, or that they wish they hadn’t in hindsight.

4. And General Michael Flynn has told Congress and the FBI that he is willing to be interviewed about the Trump campaign’s “possible” ties to Russia in exchange for criminal immunity. Which means he’s either bluffing, or he’s got something pretty juicy to offer up. (Or he might just have a smart lawyer).

Michael Flynn on #MTP in Sept: "When you are given immunity, that means you've probably committed a crime." https://t.co/Wt3tQB9UfV

5. The Senate voted to reverse an Obama administration rule that would have prevented states from blocking Title X grants to Planned Parenthood and other health care centers that provide abortion. 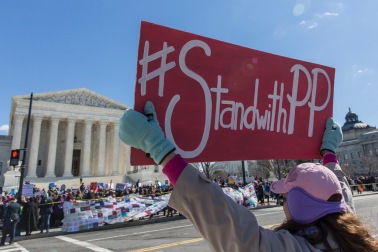 The vote just barely squeaked by, with 50 GOP Senators voting to reverse the Obama rule.  VP Mike Pence had to come in to be the 51st vote in favor.

Why didn’t Senate Democrats block this move with a filibuster?  The GOP used the same obscure, nearly unprecedented move for the Planned Parenthood vote as they used to reverse the internet privacy protections.  As I explained in yesterday’s post, this method makes it impossible for Democrats to use the filibuster.

6. On a happier note, Nate Cohn of New York Times’ The Upshot explains why Democrats might have a real shot at taking the seat formerly held by Tom Price in Georgia (District GA-6). A special election is being held there on April 18 to fill his seat, which was left empty when he became the Health and Human Services Secretary. The Democrats seem to have found quite a strong, energizing candidate in 30-year old Jon Ossoff.

Mr. Trump struggled to victory in this district, a well-educated suburban area north of Atlanta. He won by just 1.5 percentage points, down from Mitt Romney’s 23-point win in 2012 . . .

The idea of a competitive race here would have come as a surprise to many just a few months ago. Mr. Price won re-election with a healthy 62 percent of the vote, which observers have held up as a stronger indicator of the district’s partisanship than Mr. Trump’s performance. Democrats also have a poor track record in special elections.

But Mr. Trump’s weak performance last November was a sign that this race could be competitive.

If you happen to live in the district, you just may be able to get a lift to the polls from Alyssa Milano & Christopher Gorham:

7. And in more good news, a settlement has been reached in a lawsuit over the lead contaminated water pipes in Flint, Michigan. The settlement awards $97 million in state money to replace at least 18,000 lead or galvanized steel water lines. Many of the people of Flint have been living with tainted water for years, having to use bottled water not just for drinking & cooking, but for bathing and all sorts of other everyday activities that the rest of us take for granted.  This was very long overdue for them.

8. And in still more good news, the U.S. Supreme Court has rejected the standard the state of Texas has been using to determine “intellectual disability” for the purpose of death penalty cases.

In making its determination in the case under review by the Court, the Texas court looked at factors other than the defendant’s intellectual abilities, such as his adaptive skills. It also used outdated medical findings and adhered rigidly to IQ guidelines.  Writing for the Majority, Justice Ginsberg said:

Texas cannot satisfactorily explain why it applies current medical standards for diagnosing intellectual disability in other contexts, yet clings to superseded standards when an individual’s life is at stake . . . At 13, Moore lacked basic understanding of the days of the week, the months of the year, and the seasons; he could scarcely tell time or comprehend the standards of measure or the basic principle that subtraction is the reverse of addition.”

9. In other legal news, Trump is planning to argue that he can’t be sued in state court in civil litigation while he’s President. His lawyers are making this argument in response to a defamation suit from former Apprentice contestant Summer Zervos. Zervos is one of the women who came forward during the presidential campaign to accuse Trump of sexual misconduct.  Trump denied her claim, and Zervos is alleging that Trump defamed her when he called her (and the other accusers) “liars.”

Trump denied the accusation, including a series of tweets calling the sexual misconduct allegations “100% fabricated and made-up charges,” “totally false” and “totally made up nonsense.”

This question of whether a President can be sued for conduct unrelated to the office was settled back in the ‘90s when Paula Jones sued President Bill Clinton for sexual harassment (isn’t the circle of life strange?!).  And the U.S. Supreme Court ruled that the case could proceed.  But Trump’s argument is that the Jones case was in federal court, while his case will take place in state court.  So . . . it’s different.  There is of course a difference between state court and federal court, but it’s hard to imagine any way in which that would be relevant to whether a President can be party to the trial.

10. And the “using the U.S. government to hawk your business” gene seems to run in the extended family. Treasury Secretary Steve Mnuchin took the opportunity during a live interview with Axios to plug two different movies produced by his film company.  But it’s all good because he made sure to preface it by saying, “I am not promoting any product, but . . .”

11. And one non-political story, just because it’s pretty fascinating. The New York Times  reports that more and more patients are opting to stay awake during surgery, even some pretty significant surgeries, like knee replacements.  And interestingly, even this story manages to have a bit of a connection to our current politics:  One of the surgeons quoted in the story opined that “a patient’s decision to remain awake during an operation also reflects a growing suspicion, generally, of authority figures.”

12.  Oh, and a bit of bonus blog news:  In case you missed the unveiling on Monday, the blog got a new name, DC Deciphered.  We also have a cool new logo, and our Twitter is up and running @DCdeciphered . . .