For the first time in a long time, we’ve had a week that wasn’t dominated by the Russia probe, though the Russia-related stories did continue to pour in.  Trump’s first international trip 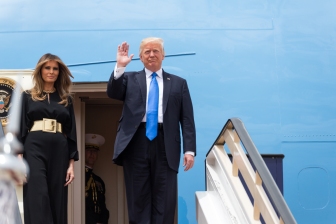 dominated what turned out to be an extraordinarily busy news week.  The trip’s been going surprisingly well, or at least it had been, until Trump reached the NATO portion of his journey.

And several other major stories filled the news this week: there was the horrific terror attack in Manchester, England, the release of the much anticipated CBO score of the GOP’s health care bill, and a truly bizarre story out of Montana, in which – on the eve of the vote – the GOP candidate for a special House election “bodyslammed” a reporter who had asked him a question he apparently didn’t want to answer (and then went on to win the election).

Every one of these stories would have normally filled the news cycle for an entire week on their own, but this week, they all competed for attention.  And believe it or not, still other news was proceeding in the background.  So what else happened this week that you might have missed?

1. The Fourth Circuit Court of Appeals has rendered its judgment on Trump’s travel ban:  the court upheld the nationwide injunction that was put in place in March by the lower court in Maryland.  So the Trump administration will still not be able to proceed with its ban.  The appeal was heard by the entire 13 judge panel of the 4th Circuit, and the ruling was a 10-3 ruling.  Judge Roger Gregory, writing for the Court, did not mince words, saying that Trump’s executive order:

speaks with vague words of national security, but in context drips with religious intolerance, animus and discrimination.

Like the other courts that have ruled on both version of the ban, this court looked at  Trump’s own words to determine the intent of the executive order:

The evidence in the record, viewed from the standpoint of the reasonable observer, creates a compelling case that (the executive order’s) primary purpose is religious. Then-candidate Trump’s campaign statements reveal that on numerous occasions, he expressed anti-Muslim sentiment, as well as his intent, if elected, to ban Muslims from the United States.

And the judge said that while the President has wide authority over immigration decisions, “that power is not absolute. It cannot go unchecked.”

We are still waiting for a ruling from the 9th circuit on a similar appeal, but no matter what that court decides, the travel ban will remain blocked because of the 4th Circuit’s decision.  It seems almost certain that this case will eventually end up before the Supreme Court.  As I mentioned in this post, I believe Trump will actually have a decent chance of prevailing there, since the makeup of that court obviously favors him.  Though of course nothing is certain, the conservative majority will likely rule in his favor if they can find even the slightest rationale for doing so.  While Trump has lost the vast majority of the travel ban cases so far, a little-noticed case in Virginia back in March, in which the judge ruled in Trump’s favor on the ban, shows that it’s possible to find a rationale to do so.

The 4th-Circuit’s decision speaks for itself. Trump’s Muslim ban "drips with religious intolerance, animus, and discrimination."

2. When Trump met with the Pope on Wednesday, the Pope gave him a copy of his 2015 encyclical on protecting the environment from climate change. Trump told the Pope he’d read it. Who knows if Trump will even glance at the document. But if he does, the timing could not be better, because as I’ve mentioned in a couple of previous news roundups, Trump’s decision on whether to remain in the Paris Climate Accord is expected any day now.

Pope Francis gave Donald a copy of his climate change encyclical & a treatise on progressive economics.

Hope he included the Cliff's Notes.

Trump campaigned on a promise to withdraw from the agreement, but now he has advisers on both side of the argument – some urging him to stay in and some telling him to pull out.  The advisers who everybody assumes are the most influential – Jared & Ivanka – supposedly want him to remain in the agreement, as does his Secretary of State (and former Exxon CEO) Rex Tillerson.  So that gives us some hope.

ICYMI: The Pope gave Trump a copy of his encyclical on climate change earlier today. We thought we'd share another good quote from it. pic.twitter.com/FsbQOKBQg4

4. In the meantime, the NY Times has a big report out explaining how the swift rollback of environmental regulations under the Trump administration – and his EPA Chief Pruitt – is paying big dividends for oil & gas companies.

The article focuses on one company in particular, Devon Energy, which has a long relationship with Pruitt (going back to his days as Oklahoma attorney general), that focused on fighting these regulations.  Under the Obama administration Devon was supposed to pay a large penalty for illegal chemical emissions and construct a system to mitigate these emissions.  After Trump’s election the company announced it would do neither of those things:

The extraordinary about-face reflects the onset of an experiment in President Trump’s Washington that is meant to fundamentally reorder the relationship between government and business. Across the federal government, lobbyists and lawyers who once battled regulations on behalf of business are now helping run the agencies they clashed with.

Mr. Trump and his team believe that loosening the regulatory grip on business will help the economy, create jobs and allow Americans “to share in the riches,” as he said during the campaign. But in the energy field, environmentalists, Democrats and even some in the industry fear the efforts will backfire, harming health and safety without creating much economic benefit.

The E.P.A. has not yet made a public response to Devon’s new posture, and Mr. Pruitt declined to comment for this article. But the new approach follows a series of important victories for the energy industry in Washington that could reshape environmental policy on a national scale and undermine the Obama administration’s campaign to combat climate change.

5. Senator Mark Warner (D-VA) introduced a bill to address the concerns of workers in the “gig economy.” These are people who work for companies like Uber or Instacart and are not classified as employees and therefore don’t get the security & benefits that typically come with full time employment such as health insurance and retirement plans:

Warner, who estimates that currently a third of the US workforce falls outside traditional employment and predicts that figure will increase to 50% by 2020, said his goal is to get people to break out of the “mindset that … the only way you got benefits was if you’re a full-time, permanent employee.”

“[Portable benefits is] that emergency fund,” Warner told BuzzFeed News Wednesday. “It might be a fund to take care of a disability if you get hurt. It might work with some existing retirement programs. Part of it would be, depending on what happens with Obamacare, an ability to help deal with health care expenses. I think there will be a variety of models.”

However, some argue that the real solution to this problem is to stop classifying these workers as contract workers and to finally start classifying them as employees, with all the attendant benefits that would bring from their employers.

We need to rethink our safety net for the #GigEconomy. Our new bill helps create portable benefits for independent, part-time & gig workers. pic.twitter.com/Pdml9RFTTM

6. The gig economy mostly developed during the recession and its aftermath. It’s possible these companies were only able to thrive because they grew up at a time when so many people struggled to find full-time work and were willing to take these sorts of jobs to try to make ends meet. Now that the economy is finally improving, will these companies have to start offering better conditions to their workers in order to retain them? This question is especially pertinent in areas where full employment has been reached.

And as this next New York Times story points out, in some parts of the country, the problem is no longer lack of work, but lack of workers.  In Utah, and a number of other states, the unemployment rate has fallen so low, that employers are struggling to attract workers.  So there are companies that would like to expand, and have enough demand to do so, but there just aren’t enough employees to do the work.  It’s an odd twist after so many years of a down economy.

[L]abor shortages are weighing on overall economic growth, slowing the pace of expansion in northern Utah and other fast-growing regions even as unemployment remains stubbornly high in Rust Belt cities like Cleveland and in regions still recovering from the 2008 recession, like inland California.

To Todd Bingham, the president of the Utah Manufacturers Association, “3.1 percent unemployment is fabulous unless you’re looking to hire people.”

“Our companies are saying, ‘We could grow faster, we could produce more product, if we had the workers,’” he said. “Is it holding the economy back? I think it definitely is.”

President Trump continues to promise that he will accelerate job growth by cutting taxes and regulations. But the accumulating evidence that workers are getting harder to find, and that wages are rising more quickly, has convinced many economists that significantly faster growth is unlikely.

7. And the Washington Post reports that there are nearly 700 vacancies at the CDC right now due to Trump’s hiring freeze. Experts say this affects:

Which is just a perfect thing to have going at the exact same time you’re drafting a health care bill that will cause 23 million people to lose insurance.

8. Trump and his supporters want to sweep the problem of his loose lips under the rug (along with so many other things), but after his little slip up with the Russians last week, Israel changed its rules on sharing intelligence with the U.S.

What we had to clarify with our friends in the United States, we did. We did our checks,” [Defense Minister Avigdor] Liberman said, but he declined to say what changes had been made.

9. And finally, if you haven’t read or heard New Orleans’ Mayor Mitch Landrieu’s speech explaining why it was so important for the city to remove the last of its  confederate monuments, take a few minutes to do so now. He manages to convey, with great compassion, why those monuments are so deeply damaging to our culture.

Maybe the most powerful part of Landrieu's speech is the repeated use of "cult of the lost cause," naming it for what it is: mythology.

This really is a must-read speech, with a clear-eyed view of our past as well as our present. https://t.co/wJtDZ1Xlr6