Happy 4th of July week!  As is common for a holiday week, it’s been a pretty slow news week.  Most of the focus has been on Trump’s overseas trip and the G20 meeting in Germany.  And Thursday there was a little flurry of excitement when the government’s ethics chief announced he’d be resigning six months early, saying essentially that his efforts were futile under the Trump presidency. 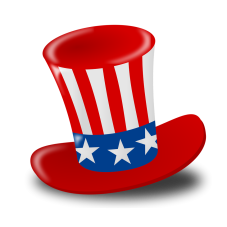 Oh, and then there was that teeny tiny thing about North Korea launching an ICBM, which puts them significantly closer to being able to launch a nuclear missile that could reach the Alaska.  But there was actually a lot of news this week in addition to that.  So what else happened this week that you might have missed?

1.  Since it’s a holiday week, let’s start with some good news:  the Court of Appeals for the D.C. Circuit has decided that the Trump administration cannot delay an Obama-era rule that would limit methane pollution from oil and gas drilling.  EPA head Scott Pruitt had ordered a 90-day delay of this rule. The court said that the Trump administration is permitted to reconsider the rule but that it can’t delay implementation of the rule while working on the revision.

This decision is significant, because the Trump administration – and the EPA in particular – has unilaterally delayed numerous Obama-era regulations, without going through the normal, time consuming process that an agency must typically follow when it creates or changes a rule.  This court decision says that is not be permissible, so the Trump administration will likely lose any similar challenges that come before the court.

2.  And a deep dive from the NY Times puts into stark relief just how important the courts will be if there’s any hope of fighting the Trump administration’s very aggressive climate (or anti-climate) agenda. EPA head Scott Pruitt came into the administration with a serious plan to dismantle & deregulate, and he is executing it – swiftly.

According to the Times, Pruitt is getting most of his advice and assistance from the very industries he’s meant to regulate, along with a handful of political appointees at the EPA.  He barely makes use of the career EPA staff – also known as “experts” or “scientists” – at all. Instead, his friends at Dow Chemical and the American Petroleum Institute are giving him all the input he needs:

In the four months since he took office as the Environmental Protection Agency’s administrator, Scott Pruitt has moved to undo, delay or otherwise block more than 30 environmental rules, a regulatory rollback larger in scope than any other over so short a time in the agency’s 47-year history, according to experts in environmental law . . .

And he is doing all this largely without the input of the 15,000 career employees at the agency he heads, according to interviews with over 20 current and former E.P.A. senior career staff members . . .

[T]he agency’s career scientists and legal experts say they have been largely cut out of the process. Senior staff members with decades of experience in environmental law and science said they had been consulted rarely on the agency’s major decisions to undo environmental protections.

Instead of using his 15,000-person staff, Scott Pruitt is working with lobbyists and GOP attorneys general https://t.co/nN5krH8wSZ

3.  And on the topic of trying to erase Obama’s legacy . . . Remember during the campaign when Trump promised he’d have a plan to defeat ISIS within 30 days upon becoming President? Soon after taking office he signed a memorandum demanding a plan from his generals within 30 days.  So have you ever wondered what happened to that plan?

Well, it turns out the new plan looks a lot like the old plan. Obama’s strategy against ISIS was actually working, so they’re pretty much sticking with that strategy.  But of course Trump doesn’t want to admit that, so . . .

The White House has asked defense officials to come up with new ideas to help brand the Trump campaign as different from its predecessor, according to two U.S. officials and one senior administration official.

Oh man. Trump ISIS plan delayed because it's the same as Obama's and they don't want to admit it. https://t.co/hlUx0oDcer pic.twitter.com/Pu1LJHhz5t

4.  But here’s one way Trump is clearly differentiating himself from Obama: the Washington Post reports that under Trump, the gender pay gap in the White House has tripled, according to an analysis by Mark Perry, an economist at a conservative think tank:

The median female White House employee is drawing a salary of $72,650 in 2017, compared to the median male salary of $115,000. “The typical female staffer in Trump’s White House earns 63.2 cents per $1 earned by a typical male staffer,” Perry writes.

5.  And Republicans are working hard to help Trump at least keep one campaign promise, this one a sop to the religious right: getting rid of the Johnson Amendment. The Johnson Amendment is a provision of the tax code that prohibits non-profit entities from endorsing political candidates.  If a non-profit violates this ban, it’s supposed to lose its tax-exempt status, though the law hasn’t been enforced very stringently.

But now Republicans in the House want to make sure it won’t be enforced at all, at least not as applied to churches.  They added a provision to a spending bill that would remove all funding from the IRS for investigating suspected infractions of the law, unless the IRS commissioner approves and Congress is notified.  And then the IRS would still have to wait months before an investigation could begin.

Nicholas Little, vice president and general counsel of the secular advocacy group Center for Inquiry, worries the proposal would essentially make it “impossible for the IRS to investigate a church.” He notes the language in the legislation very specifically singles out churches—“It doesn’t say church or mosque or synagogue or temples,” he says—which pretty clearly indicates the targets Republicans have in mind.

Trump promised to destroy the Johnson Amendment. Congress is targeting it now. https://t.co/VAFd0W1Q6h

6.  A privacy rights group has filed a lawsuit, seeking an injunction against Trump’s Advisory Commission on Election Integrity (a.k.a. the Commission to Pretend Trump Won the Popular Vote). They want a judge to block the group from collecting the voter information that it recently requested from all 50 states and to require the group to delete any data it has collected so far.  The complaint was filed on Monday at a court in D.C.

A decision from the judge could come at any time, as soon as today.

7.  While Trump is facing fierce push back against much of his agenda and is struggling to get many of his larger goals accomplished, if there’s one thing he never struggles with it’s getting ratings.  He’s even able to score ratings for other people’s shows just by turning his attention on them for good or for evil (okay, most for evil). After Trump’s very ugly Twitter rant last week aimed at Morning Joe co-host MikaBrzezinski, the show set a ratings record:

Morning Joe enjoyed its highest-rated show ever on Friday, the day after President Donald Trump targeted the hosts in a series of scornful tweets.

8.  And here’s one just for the face palm files: dozens of militia members “showed up with semi-automatic rifles, body armor, and Confederate flags” at Gettysburg National Military Park in Pennsylvania last weekend to defend confederate graves and flags. They had heard there would be anti-Confederate protest groups there desecrating the flags and graves. But the whole anti-Confederate thing was a hoax – there were no protestors.  However, one of the militia members still managed to get shot:

A self-described “patriot” accidentally shot himself in the leg at Gettysburg National Military Park in Pennsylvania, where he and dozens of others had assembled to protest reports of a group allegedly planning to desecrate Confederate graves and burn flags

Benjamin Hornberger, 23, shot himself in the leg Saturday when he accidentally triggered his revolver as he briefly rested the bottom of his flagpole against the holster it was in, Penn Live reported. Park police applied a tourniquet until he could be transported by paramedics.

"The only bloodshed came when a lone militia group member accidentally shot himself in the leg." https://t.co/igNYG6xr9W

9.  And finally, this great satire by Alexandra Petri perfectly captures the pathetic Republican posture toward Trump: After the president’s tweet, I must withdraw my support for everything but his agenda.  This excerpt gives you a taste, but please go read the whole thing . . .

I stand with my colleagues in Congress to say: The president’s tweet is beneath the dignity of the office.

This is not making America great.

The president has at last done the unthinkable: He has insulted a morning television personality in crude and ghastly terms and I must — in consequence of this hideous and vile breach of the dignity of the office — withdraw none of my support from his legislative agenda.

His remark about Mika Brzezinski is absolutely shameful and I do not stand with him, except insofar as it is necessary to stand with him so that we can make sure infants get access to pesticides, as the Founders would have wished . . .

I will add my voice to Sen. Orrin Hatch‘s full-throated condemnation and, also, to his remark that “Every once in a while you get a dipsy-doodle.” 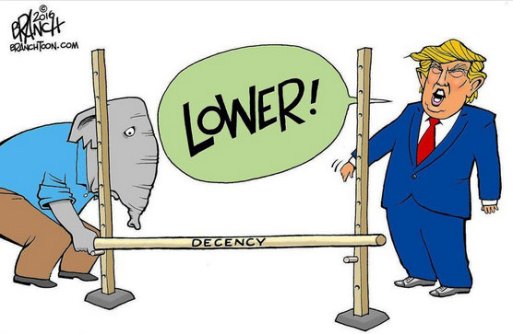