Phew!  Progressives across the country breathed a sigh of relief the Monday before last,

when the final day of the Supreme Court session came & went with no retirement announcement from Justice Anthony Kennedy.  We’re not quite out of the woods yet, because Kennedy could still announce his retirement any time over the summer (Justice Sandra Day O’Connor, for example, announced her retirement in July of 2005).  But Justice Kennedy has already hired his clerks for next year, which is a good sign he plans on sticking around for the session.

However, there have been recent reports that he’s told clerkship applicants for the following year (fall 2018) that he’s thinking about retiring then.   And once again a terrified chill runs through left-leaning America!  But if Justice Kennedy at least sticks around for the upcoming session, that will be very good news, because the Court will be hearing two cases that are absolutely crucial to the entire progressive agenda – both short and long term.

Justice Kennedy has obviously held an outsized role on the Court ever since Justice O’Connor’s retirement, at which time Kennedy became the Court’s swing vote.  So his presence on the Court (versus a Trump-chosen replacement) is critical to progressives for an endless number of reasons.  But these two particular cases coming up next session are paramount because they will help determine whether Democrats will be able to find their way back into legislative power, or whether Republicans have cemented a near-permanent lock on power at all levels throughout the country.

You see, that is one area of policy making where Republicans have focused a great deal of energy over the last two decades – methods for ensuring that once in power, they stay there.  They have done this by enacting laws that allow them, in essence, to design their own electorates.  This includes things such as extremely onerous voter ID laws, changes to voting hours & locations that target particular districts, voter roll purges, gerrymandering, and ultimately a lawsuit that ended with the bulk of the Voting Rights Act (VRA) being overturned.

There is of course much, much more to say about this history – entire books could be written about it (in fact, they have).  But I’m not going to even try to cover that here, because to do it well would take much more than a blog post.  So for those interested, I recommend one of the above linked books and/or Ari Berman’s vast collection of articles on the topic at The Nation. 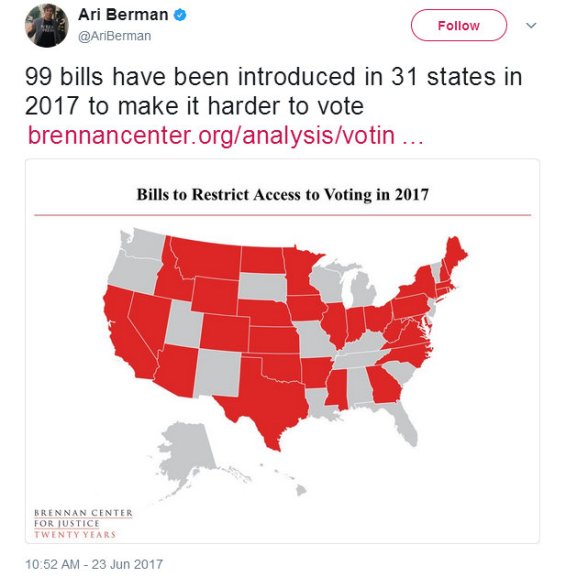 The key point is though, Republicans have had a lot of success using those tactics over the last nearly-20 years.  They are now in control of every branch of the federal government along with the vast majority of state governments.  They have the ability now to implement these policies at every level all across the country.  And in so doing, they can make it increasingly difficult for Democrats to ever find their way back into power, thus imperiling the progressive agenda from here on out.  But in the upcoming session of the Supreme Court, two of those tactics will be on the docket.  And while Justice Kennedy’s record on voting rights is mixed (he was among the five Justices who voted to overturn the VRA), as long as he is still on the Court, progressives at least still have hope for a positive outcome.

The case is an appeal from a lower court decision striking down a Wisconsin State Assembly map drawn by Republicans after they took over the state legislature in 2010.  The case was brought by a group representing Wisconsin voters.   After the new map went into effect, the Republican advantage that resulted was clear:

Why It’s So Relevant

And this sort of gerrymandering is not limited to Wisconsin.  Republicans, who famously “shellacked” Democrats in elections across the country in 2010, were in control of redistricting that year in the vast majority of states, including most swing states (redistricting is done in census years, every ten years).  And boy, did they take advantage of it.

In the first election that followed that redistricting (2012), Democrats won a majority of the votes in House elections (50.59%) yet Republicans ended up with a 33 seat advantage in the House.  Now, some of that is just because of natural geographic distribution (Democratic votes are more condensed in cities & some suburbs, Republican votes tend to be spread out through exurbs & rural areas), but a very large degree of that was gerrymandering.*  According to Politifact, it was only the second time in 70 years that a party had won the majority of the House vote but didn’t take the majority of the seats.

Gill v. Whitford, blockbuster SCOTUS case, now lined up for next term: are there constitutional limits to purely partisan gerrymandering?

And these effects have continued in the elections since. A study from the Brennan Center that looked at the 2016 election found that these effects were particularly strong in swing states, such as North Carolina, Michigan and Pennsylvania.

In North Carolina in 2016, for example, Republican candidates received 53 percent of the total votes for the House, but won 10 of the 13 congressional seats . . .

[I]n the 26 states that account for 85 percent of congressional districts, Republicans derive a net benefit of at least 16-17 congressional seats in the current Congress from partisan bias.

And a recent analysis by the AP found that in 2016, as a result of gerrymandering:

Republicans won as many as 22 additional U.S. House seats over what would have been expected based on the average vote share in congressional districts across the country. That helped provide the GOP with a comfortable majority over Democrats instead of a narrow one.

TAKEAWAY: The @GOP would have no or negligible majority in House if they didn't gerrymander. They've gamed districts https://t.co/Mw9NgUzIpY

Overall, this partisan gerrymandering means that Democrats have to overcome extraordinary odds to have any shot at taking over the House in 2018.  We frequently see polls showing match-ups between the parties, asking who the public favors in Congress.  And so far this year, Democrats have led nearly all of them.  But simply leading them is not enough.  Most political scientists believe Democrats would need to win the House vote by a margin in the range of 7-12% in order to actually win the majority of House seats.

As you can see, if this sort of extreme partisan gerrymandering were no longer permitted under the law, it would be transformative. (Keep in mind, even then, parties would still likely draw maps that favor themselves.  That would still be permissible up to a certain threshold, before it would cross over into an impermissible partisan gerrymander – but where exactly that threshold would be is the question the Court is still trying to answer).  If, on the other hand, this gerrymandering is allowed to continue, it will most likely only further solidify the GOP’s hold on power, as they use their majorities to create ever more favorable electorates.  So how likely is it that the Court will actually decide this is unconstitutional?

What Will the Court Do?

Let’s assume the four more liberal Justices will uphold the lower court decision striking down the gerrymander (there’s no guarantee that they will, but it seems likely based in their history in voting rights cases).  So we’re back where this post started: Justice Kennedy.  For a bit of a hint on what he’ll do, we can look to an earlier Supreme Court case, where the Court actually considered the question of partisan gerrymandering once before.

The case was Vieth v. Jubelirer, decided by the Supreme Court in 2004.  In that case, five Justices, including Justice Kennedy, held that partisan gerrymandering can be unconstitutional, but because the Court had no workable test for determining when the line into impermissible gerrymandering had been crossed or for how such an instance would be fixed, Kennedy said the Court should not step in.

.@Steve_Shu Anthony Kennedy seemed open to ruling gerrymandering unconstitutional in Vieth v Jubelirer, trouble is coming up with a standard

So the Vieth case demonstrated that Kennedy is open to the idea that partisan gerrymandering can cross the line into unconstitutionality.  The big question in Whitford will be whether the respondents have come up with a test that the Court will consider workable, i.e. is there a consistent way to determine where exactly that key threshold lies?  Two political scientists think they’ve come up with that test, known as “the efficiency gap,” as Dylan Matthews explains in this Vox article.  There’s a whole lot riding on whether or not the Supreme Court agrees with them.  Sometime in the Court’s next session, we’ll find out.

And here’s Part 2 of this post, in which DC Deciphered discusses the second crucial case that will be reviewed by the Supreme Court next session . . .

To see how much of this disparity results from gerrymandering as opposed to natural geographic sorting, let’s look at the 2008 election, before this extreme gerrymandering took place.  Democrats won the overall House vote in 2008 with 53.2% of the vote.  That was enough to earn them 257 seats to the Republicans’ 178, a huge Democratic majority.

Today, that win percentage likely wouldn’t even be enough to give Democrats a majority of seats at all.  As noted in the body of the post above, Republicans would likely hold onto their majority in the House if Democrats were to win the vote by that margin in an election held today.