I know, the suspense has been killing you!  You’ve been waiting since yesterday to hear about the second reason the next term of the Supreme Court will be so crucial to the progressive agenda. In Part 1 of this post, I talked about the dread many progressives felt recently over rumors that Supreme Court Justice Anthony Kennedy would retire.

We are all momentarily breathing easier, because it appears likely that he’ll be staying on the Court for at least one more year.  But there are signs he may retire after the next session is up.

However, as I noted in Part 1, one more year of Justice Kennedy could be invaluable, because there are two voting rights cases coming up next year that will be critical to the future of the progressive agenda, both short and long term.  In Part 1, I explained why these types of cases are particularly momentous right now, and then I discussed the first case, Gill v. Whitford, in which the Court will take up the question of partisan gerrymandering.  Now let’s talk about case number two . . .

The second crucial case the Court will review next term is Husted v. A. Philip Randolph Institute.  The question in this case is whether Ohio’s Secretary of State, Jon Husted*, violated the law when he purged voters’ names from the voter rolls. The groups challenging the state, including the A. Philip Randolph Institute, say that under what Ohio calls the “supplemental process,” Husted removed voters from the rolls based on their failure to vote, which is prohibited under the National Voter Registration Act (NVRA).

States are required by law to maintain their voter rolls, which includes periodically removing ineligible voters.  And under the NVRA, a voter may be removed from the rolls due to death, a change in address or other reasons specified under the law.  However, the NVRA does not list failure to vote as one of those reasons.  Under the Ohio process, voters were targeted for removal after failing to vote in only one election cycle. (See this article for more on the facts of the case, particularly the details of how the purge worked, as there were several additional steps involved).

The right to vote is not a use-it-or-lose-it right. #SCOTUS should strike down Ohio’s voter purge system. https://t.co/my9RUBBgWG https://t.co/tgLr0RrlxV

As a result of the voter purge, hundreds of thousands of eligible voters were removed from the voter rolls. The groups challenging the purge say that those removed were disproportionately low-income voters and voters of color. And according to a 2016 Reuters article, the voter purges appear to have overwhelmingly affected Democratic voters, even if that wasn’t the intent:

Voters of all stripes in Ohio are affected, but the policy appears to be helping Republicans in the state’s largest metropolitan areas, according to a Reuters survey of voter lists. In the state’s three largest counties that include Cleveland, Cincinnati and Columbus, voters have been struck from the rolls in Democratic-leaning neighborhoods at roughly twice the rate as in Republican neighborhoods.

The ACLU brought a lawsuit on behalf of two Ohio groups that register voters and one individual voter who had been purged from the rolls. The suit sought to stop the purges and restore eligible voters whose names had been removed.  The district court ruled against the ACLU, but the Sixth Circuit Court of Appeals reversed that ruling.  The Appeals Court found a violation of the NVRA, and struck down Ohio’s process for removing voters. This allowed thousands of Ohioans to have their voting rights restored just in time for the 2016 election.  But now the Supreme Court has accepted Secretary Husted’s request for review of the case.

"We think it's great news," says @OhioSOSHusted of the Supreme Court case.

Like with the gerrymandering case discussed in Part 1 of this post, the outcome of this case could be transformative to the future of our elections and – consequently – of the progressive agenda.  Republicans have been using voter purges around the country in order to try to shape the electorates in their states or districts.  In some instances they’ve been prevented from doing so by lawsuits, but in many instances they’ve been successful.  Where the purges have gone forward, they’ve sometimes had a dramatic effect.

The most famous case of a voter purge in this country was in the 2000 presidential election, when Florida claimed to be purging felons from its voter rolls but instead purged hundreds or possibly thousands or even tens of thousands of non-felon, eligible voters from the rolls.   People who had never been in prison – who had never had any encounter with the law at all – showed up to vote, only to find that their names weren’t on the voter list.

This was because Florida’s Secretary of State had permitted an extremely careless, overly broad purge in which anyone with a name that even sort-of matched the name on the list of felons was removed from the voter roll.  And we all know how that ended: Florida was the determinative state in that election, and the state was decided by only 537 votes.  Though no one knows exactly how many people were falsely purged from the rolls that year, it was certainly more than enough to make up that difference.

Despite processes, false positives can still end with legitimate voters being denied their rights. https://t.co/oa3KoSmL6L

Now, the 2000 purge in Florida was a different sort of purge than the one at issue in Ohio.  In Florida, they were specifically purging the rolls of felons (or that was the stated goal, anyway).  In Ohio, and in most of the purges that take place around the country today, the stated goal is to remove people from the rolls who are not eligible to vote for any one of a variety of reasons, such as moving out of the state/district, death, non-citizenship.  But that 2000 purge in Florida is significant, because it demonstrated that even a small number of misplaced names in just one state has the potential to change the result of a nationwide election and the course of history.

Now imagine doing that bit by bit in all of the states controlled by Republicans.  As Ari Berman explains in his article How the 2000 Election in Florida Led to a New Wave of Voter Disenfranchisement, the way things shook out in Florida in 2000 turned the lightbulb on for Republicans, showing them how effective voter suppression tactics can be.  It was at that point that all of these various methods for suppressing votes  and designing a favorable electorate (e.g. voter purges, voter ID laws, organized disinformation campaigns, etc) really took off, and they’ve only been gaining steam ever since. 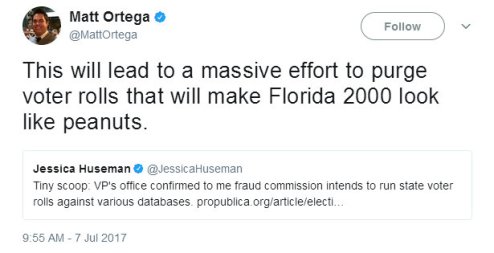 And now, we have Trump’s so-called Election Integrity Commission, whose stated goal is to root out voter fraud, something which every expert analysis has shown to barely exist.  The commission has recently requested extensive voter data from all 50 states,* and voting rights experts fear that the goal of that data collection is to eventually engage in nationwide voter purges.   That this is the ultimate goal of the Trump administration seems to be backed up by a letter the Trump Department of Justice recently sent to 44 states.

[Update 1/10/18: Trump’s “Election Integrity Commission” was just recently disbanded by the Trump administration, but the administration is not giving up on the Commission’s true goal of suppressing votes.  The task of purging voters will now be shifted to the Department of Homeland Security instead.]

The DOJ letter asks the election officials in these states to outline their process for complying with the NVRA.  And by this, they mean the portion of the NVRA that deals with cleaning up (i.e. removing people from) voter rolls, not the portion of it that it intended to help people vote.  Voting rights experts view this as an attempt by the DOJ to fish for any instances of non-compliance, since it is highly unusual to send out 44 letters all out once.  And it’s particularly suspect in light of the fact that the DOJ letters were sent the same day the Trump Commission sent out their requests for voter data:

“When you see DOJ send a bunch of letters like this requesting information about compliance with the law, that’s usually a sign that they’re kicking an enforcement campaign into gear,” Sam Bagenstos, who served as the principal deputy assistant attorney general for civil rights from 2009 until 2011. “It looks like what they’re doing is they’re laying the groundwork to file lawsuits against states that, in their view, aren’t kicking enough people off of the rolls.

Why This Supreme Court Ruling is So Critical

So it’s clear that the voter purge case that will be reviewed by the Court next year is of vital importance.  The question in the Ohio case is about a very particular procedure that was used for cleaning up the voter rolls. As mentioned above, states are allowed – actually required – by law, to clean up their voter rolls regularly.  So even if the Court upholds the Sixth Circuit ruling striking down the particular process at issue in this case, the fight over voter purges won’t end entirely.  There will still be a fine line between what’s permissible maintenance and what constitutes a purge.

But a ruling against Ohio’s purges would set a much more stringent standard for the voter maintenance process and make it significantly harder for Republicans to remove vast numbers of people from the rolls with wildly overbroad purges.  If, on the other hand, the Supreme Court overturns the sixth circuit ruling, we can expect these purges to not just continue but to expand in their number and scope, likely leading to disenfranchisement on a grand scale.

What Will the Court Do?

Chris Geidner, Legal Editor at Buzzfeed, tweeted that it’s not a good sign for voting rights advocates that the Court has agreed to take up this case, since the decision that’s being reviewed is already in their favor.  There is no split among the circuit courts, which is the thing that typically puts pressure on the Court to review a case. In this instance they are choosing to wade into an issue that they could easily stay out of.

Geidner is implying that this suggests they are interested in overturning the lower court ruling.  However, it only takes four Justices to grant certiorari (i.e. to accept a case for review).  So even if agreeing to take the case is a sign that certain Justices want to overrule it, that only tells us there are at least four Justices in that camp.  There could be more than four, but not necessarily.

And it’s true there is no guarantee, even if he remains on the Court, that Justice Kennedy would rule the way we would like.  As I mentioned in Part 1 of this post, Justice Kennedy has a mixed record on voting rights.  But with him on the Court (as compared to a Trump-chosen replacement), progressives can at least hope for a ruling in our favor on these these 2 pivotal cases.  So let’s cross our fingers that the 80-year-old Justice Kennedy will take the advice of 95-year-old Carl Reiner, who wrote endearingly in the New York Times last week: Justice Kennedy, Don’t Retire.

I know what it means to be your age. But these are not ordinary times, & you, sir, are anything but an ordinary man. https://t.co/Chv92BnZTT

*This data collection is on hold as of Monday, pending a judge’s ruling in a lawsuit filed by a privacy rights group seeking an injunction against the commission.

**Husted is running for Governor of Ohio, to succeed John Kasich who is term limited out.  Kansas Secretary of State Kris Kobach, who’s heads Trump’s Election Integrity Commission, but is better known as the country’s foremost vote suppression practitioner, is also running for Governor of his state.  It will be interesting to see if these sorts of high stakes, high publicity battles over voters’ rights/vote suppression start to become a launching pad for Republican politicians with higher aspirations.